Today is a day I used to celebrate with music, food, dance and drinks beyond imagination.

The day Trinidad and Tobago became independent from English Colonial Slavery or #Rule as they label it.

Today is not that day, for T & T has been taken by #tyrants. Allow me to expand on the attached picture of the King besides Dr. Eric Williams, the founder of the People's National's Movement Political Party.

April 18 1966. His Imperial Majesty Emperor Haile Selassie. The King of Kings, The Lord of Lords, The 225th Conquering Lion of The Tribe of YaHud-aH or Jud-aH visited the Land of T & T.

(It does not matter if one believes in H.I.M. or not. At the end of the day, his actions speak factual truth beyond one's own disbelief or belief. For belief is the enemy of knowing and those who know, surely know.)

In 1955–56 Dr. Eric Williams founded, started and ran the PNM party, which won the 1956 general elections. He became chief minister in the country’s first party government and with the achievement of internal self-government in 1959, he served as premier. The PNM won the December 1961 elections by a landslide. Williams became prime minister of the colony and then of the new nation upon its achieving independence in August 1962. He made the country a republic in 1976.

Now, what is a republic you may ask?

(Republic, form of government in which a state is ruled by representatives of the citizen body. Modern republics are founded on the idea that sovereignty rests with the people, though who is included and excluded from the category of the people has varied across history)

The PNM party is currently the tyrants that rule over my beloved nation of Trinidad and Tobago. The citizens have lost their power over their control.

You see, two great men stand together in this picture, yet one is greater than the next. Not because of feeling and ego but because of power instilled by JaH. Both educated to a high degree, yet the spiritual essence of #KingTafari flowed wherever he walked. The power of The Most High vibrated outwards from wherever he landed his feet. He is the defender of the faith and therefore his faith must be defended.

One must look at our government today and world government leaders. We must see them for who they are and not for what we want them to be. Look them in their eyes and see the trauma that they house. Feel the pain that they lead with and know that their hearts are not clean.

Know that they only care for themselves and their families. Selfishness, greed, lust, gluttony, jealousy, envy and pride rule over their lives and empathy does not exist within their hearts. They lack the mental strength to make decisions that weak minded individuals find terrifying. These are not opinions but rather factual truth of observation, wisdom and discernment. Actions speak louder than words, plain and simple.

Corruption was far from the space wherever the Emperor may have roamed, for he is the light within

There is not ONE current leader on Earth who can stand up next to Emperor Haile Selassie I and not fall upon their knees with shame and guilt of their own actions.

There is not one world leader that can lead the way that he did to date. For as he sought to unite Africa and educate his people into the future, men of African heritage and lineage now seek to control enslave their own brothers and sisters. It is a disgrace and all will be held accountable for their crimes against hu-manity.

The colonial hangover is to be removed from the Caribbean islands and this Earth. Once and for all. One and done.

To every man their own philosophy, just make sure JaH gave you the key and degree from which you believe is your destiny. For when one rules over a nation with manipulation and ego, one will surely be dealt with by their creator.

So in the spirit of Independence of Trinidad and Tobago. I speak truth of freedom for those who seek to take it back. I speak rights for those who were wronged. I speak love for those who are hated. I speak war for those who are at peace. Autonomy is key and no man should rule over another. We must hold each other accountable but first, hold the self responsible for every thought, word and action. Then one will see change, otherwise, one will continue to live a selfish life, pretending that all is fine, when in reality, the end is nigh. King Robbie said it best. "Think you're in heaven but you're living in hell".

I cannot celebrate nor smile, yet rather I shed tears for the country that has been manipulated by people who are too smart for their own good. Brought down to the lowest level of hu-man decency, if there be any. Liars, traitors, thieves, murderers and paedophiles. Ruling over a world of which they did not create.

Know this, government of Trinidad and Tobago. Parading around as PNM.

You are being closely monitored by The Most High himself. His judgment has been made and verdicts have been sent. The only way out, is in.

May JaH have mercy on all of the souls that have chosen evil over good. For into the pit you will go, served up on a silver platter, to your master, the dark evil known as The Satan. The cleansing has begun and any opposition of YHWH is to be removed from this Earth. It was written.

Satan Going Down at #FunZLand, Matura, Trinidad and Tobago @EnergyMediaTT

Life and Meditation Lessons With JudaH

Welcome To The Land Of T & T

Quick Updates from The Land of T & T

Put On The Whole Armour Of JaH

Michael Jackson Tried To Warn You All

There Is No Greater Artist Than JaH

The Crash of The Rothschild Financial System

There is no What If, only What Is 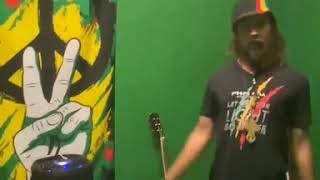